For retail enquiries (discounted rates for bookshops) please contact Simon Millward.
If you would like to buy a copy and can't find it in the shops, please email one of the committee via the Contact page.

​
Books by members of Moor Poets
If you are a member of Moor Poets and would like details of your book(s) to appear on this page, please contact Don Pearson.
​
Transitions
Helen Boyles 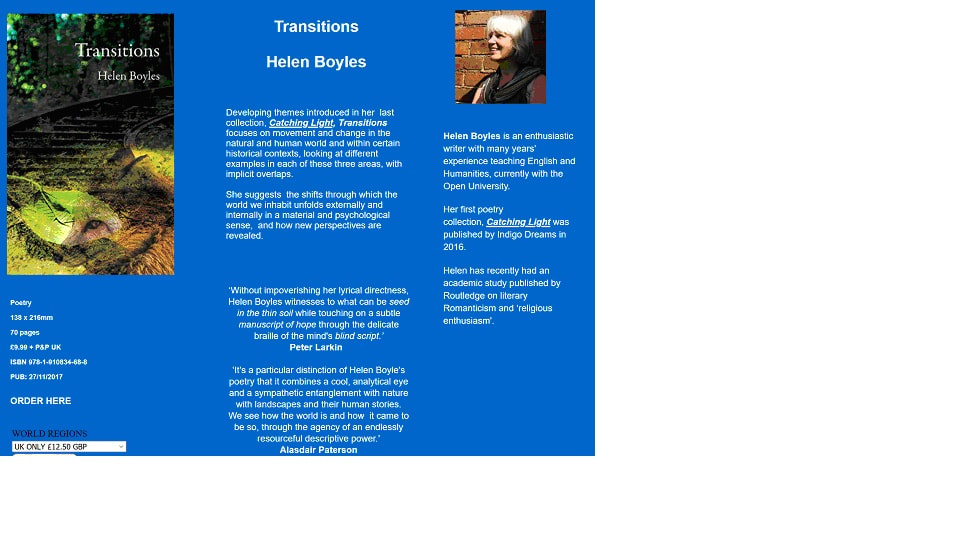 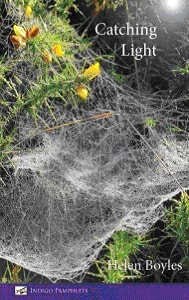 ​Review extract by Neil Leadbetter for ‘Write Out Loud’, May 2017.
This debut pamphlet collection, comprising 21 poems, covers a range of subjects linked primarily to the natural world. Its title Catching Light encapsulates what these poems are about. … Boyles knows all about light. For her, it is a never-ending source of inspiration. In ‘Western Light’ she writes about how it illuminates stone surfaces, sharpens the definition of the landscape, catches the flight of birds, alters spaces and shifts the relationship of one thing to another.  There is another sense in which this collection is suffused in light and that is the way in which the creative spirit can cast light on all manner of things as well as helping to bring them into being.[…] These are carefully crafted poems grounded in topography, history and light. They capture the beauty of landscape and celebrate artistic endeavour. They are at once both vivid and captivating and leave you wanting to come back for more.
Helen has another collection, ‘Balancing the Elements’, due to be published in Spring 2021
by Palewell Press.
​Helen Boyles, Catching Light, Indigo Dreams Publishing, £6 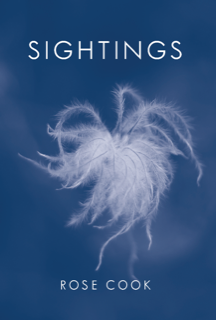 Here are two comments from reviewers of my new book:

Here are poems “bright as Lord Krishna’s hair’ that take great joy and delight in the wild-life of sea and shore. In an age of cynicism and depression over climate change these poems are a pure celebration of nature; to quote a line from her poem about building a stone wall, they are like “the heartings” that brim with “tumble and lustre”. A truly uplifting collection.
- Gill McEvoy (‘Rise’ pub Cinnamon Press)

There are poems here delightfully willing to see through the eyes of the creatures involved – whales, dogs, seals, fish, birds – while the human element is aware of itself as the inevitable record of vision.

And there are poems here which speak directly to the hidden in all of us; losses which remain on the inside brought to sight/light by Cook`s tender language and deft crafting.

With the ‘white sheets’ on the washing line, Cook surrenders to sight, while that ‘single red shirt’ acts as a warning: Look out. And up, and everywhere, all the time, because it`s a good thing. Because it helps.
- Sandra Tappenden (‘Speed’ pub Salt Modern Poets)​ 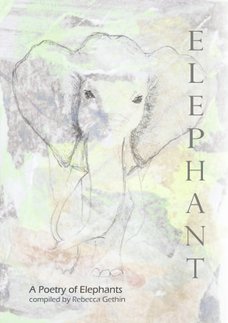 ​A Poetry of Elephants
​Rebecca Gethin
Auden wrote that 'poetry makes nothing happen' but this anthology, A Poetry of Elephants, is making a small difference to orphan elephants in Kenya while raising awareness about their plight and the hard work of the David Sheldrick Wildlife Trust who rescue and care for  them until they can return to the wild. £800 has already been deposited in the DSWT bank because every penny of this book is being donated, even printing costs. The poetry within is elephantine and contains a multitude of different voices celebrating and mourning elephants in the wild as well as the image of them in our lives. 31 poets contributed wonderful poems to make this happen, including Penelope Shuttle, Caroline Carver, Robert Peake and several Moor Poets members, among them Jenny Hamlett, Simon Williams, Graham Burchell, Rosie Barrett, Rose Cook, Ian Royce Chamberlain and Rebecca Gethin, whose brainchild it was. It has been published by a very generous mystery publisher but suffice it to say it is one of the poets (not a Devonian). You can read more about it and buy it here. 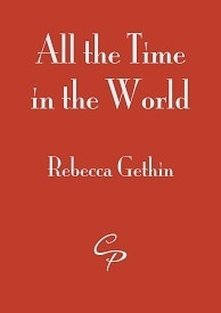 All the Time in the World
Rebecca Gethin

Rebecca Gethin’s mother died when she was two. It was a tragic, unexpected death from lung cancer.  ​At the age of 32, she left two small children and a husband to fumble their way through grief and shock. Half a century later, a handful of brief letters unexpectedly emerged, written by the dying woman to her mother and sister. In these poems that woman’s voice — facing death and loss — is heard again, and her daughter replies.

​It is Gethin’s distillation of her material that sets her poems apart, causes them to ring with the truth of this statement. She notes that the child she was ‘is still in the room’ (The visit) ‘more than sixty years later.’  Inhabiting her mother’s voice through judiciously placed fragments of found letters, each detail is fitted into place like a piece in the rich mosaic of a short life lived lovingly. The effect is enhanced through Gethin’s characteristic use of naturalistic imagery: a mole becomes the forbidden word ‘want’ burrowing out of its winding
passages’, creating ‘want-hills.’ A laburnum tree dangles its golden flames at sunset…
Rooks flock ‘to haunt the trees at dusk.’ It is all there, painstakingly crafted, distilled to its
finest essence.  Wendy Klein

Available from Cinnamon Press at £4.99 or from Rebecca Gethin.
​ 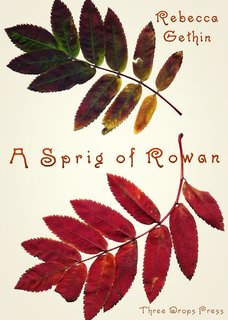 A Sprig of Rowan
Rebecca Gethin

In A Sprig of Rowan Rebecca Gethin leads us through earth myth and otherworld lore, archaeological finds and everyday ritual. The splash of a selkie, an owl in flight - natural
​and supernatural magic alike flit within these poems.

Rebecca Gethin's re-interpretations of 'the pagan' are full of contemporary relevance. Her poems track the liminal, exploring the mysterious, the shadowy, the territory of moonlight. The reader is drawn into an underside-universe of acute realities and memorable encounters with such entities as 'a wraith of the darkness' or a blacksmith who must have fairy blood, or places such as 'the ancient library of granite'. We are invited to read a 'script of quartz'. We are taken on an elemental and magical journey rich in colour, close observation and lovely active language. A beautiful collection.  Penelope Shuttle

​Available from Three Drops Press at £6.00 or from Rebecca Gethin. 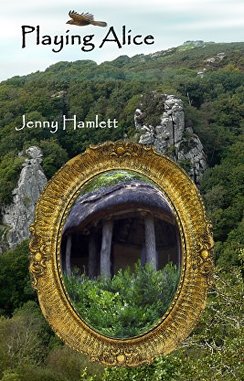 In Playing Alice, her second collection, Jenny Hamlett takes as her guiding inspiration a sense of place and the people who inhabit it. Into the contours of lost lives she folds her own experiences; through the book runs the thread of time and its passing, both elegiac and life-affirming. Clear-eyed and warm-hearted, these poems are written by someone who understands the nature of loss and the wonder of being alive.

These are very British poems with a deep sense of history, open space, closeness, atmosphere and resignation to the vagaries of our weather. With wonderful concision, Jenny Hamlett invites us to meet family, friends, strangers and historical figures in a church, a pub, a rustic hut, a bothy, or be close by in wonderfully interpreted landscapes from Cornwall to Scotland, where, a waterfall  ‘is the colour of a woman’s hair as she strides her last few years.’  Graham Burchell


​Available from Indigo Dreams Publishing at £8.99 or from Jenny Hamlett. 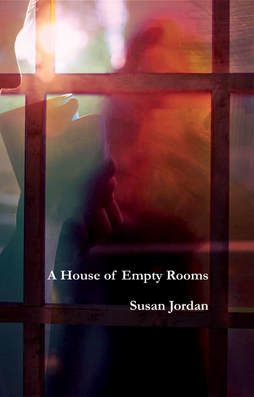 A House of Empty Rooms
Susan Jordan
In A House of Empty Rooms Susan Jordan writes about her family and Jewish background, about love and loss, and about the lives of famous people. Some of the poems are serious and elegiac while others are ironic, blending pathos with wry humour. We are rarely far from the presence of death, but there is lightness here too.

A House of Empty Rooms is filled with deftly crafted, nuanced poems which explore the meaning of family, of mortality and change with tenderness and integrity. Susan writes:
​"I didn't say my heart/ was a house with all its doors wide open/ or that it was you who'd opened them" but that is exactly what these poems achieve.
Rebecca Gethin

Susan Jordan conjures scenes from childhood that bring you in and seat you at the family's table. There's a lot of grief in this finely worked collection, but it's tempered with an inner humanity. A rich book, which rewards a careful reading.
Simon Williams 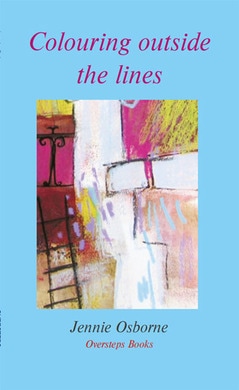 Colouring Outside the Lines
Jennie Osborne

​​Osborne's wide-ranging poetry is a project of tinily significant readjustments of perception.
Her many concerns may seem at times to skirt the quotidian but, at its best, her attentiveness peels up a near-edge of reality for keener inspection. The poem First to Blink stands out in particular as a profound challenge to our point of view, its speaker surreally morphing between narrator and the poem's hauntingly conjured roadkill-prey.  Mario Petrucci

In varied forms and with lively music, Jennie Osborne's poems lift fluently from the page, covering diverse subjects, from painting and sculpture to sky gazing and the natural world; from feminist fantasy to the memory span of goldfish. There's also a quiet politics here and a restless self-questioning, brought alive in taut lines, spry images and considered language.  ​Andy Brown 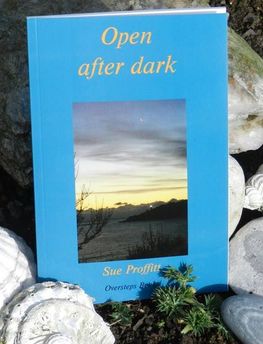 Open After Dark shepherds us through a universe of the half-seen, the liminal, 'the eye-edge' of poignant realities beneath the quotidian surface when 'nothing holds you up, nothing holds you down.' Each poem is a quest for truths caught in the lighthouse flash of the poet's focus. She is unflinching about her 'constellation of absence': the ever-present sense of all her losses makes Sue Proffitt the poet and seer that she is. A tender and passionate collection.  Rebecca Gethin

Sue Proffitt's poems are not so much observed as lived, inhabited. Whether it's her vivid creature poems, where the passing of a herd of wild boar is 'ringing like a storm glass', or the exquisite personal poems of family and love, you experience what the poet has experienced. Here are words carefully selected to convey an event, a feeling, an atmosphere. This is an exceptional collection to read and re-read.  Simon Williams


Available from Oversteps Books at £8.00 or from Sue Proffitt